After wrapping The Journey II tour across the nation and releasing his emotional Start Again EP, Seven Lions returns with a fresh new collaboration. The melodic dubstep champion joins forces with Wooli and Trivecta to create a galactic bass single that drips with passion. “Island” features endearing vocals by rising artist Nevve, and was released via Ophelia Records. 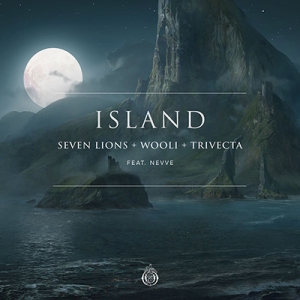 “Island” Will Take You Through a Roller Coaster of Sensations.

The song gently opens with Trivecta’s soft guitar melody and whisks of airy synths that float around Nevve’s lush verses. Nevve describes the temptation to connect with a lover who seems far gone in the relationship, however she’s not letting go.

“But I know it’s not over

Feel the static, I can feel you getting closer

Send a flare to light the way,

Way onto your island.”

The verse rapidly grows with Trivecta’s trance-like build that crashes into a melodious wave. Once you hear that first drop you know it’s Seven Lions and his signature touch of bass-heavy euphoria. Soon after Wooli’s massive riddim-heavy wubs kick in to release havoc. “Island” is full of loops and turns to unveil an assortment of feeling and emotion you never knew you could embrace in a matter of four minutes. The thing that makes Seven Lions’ songs so memorable is this combination of dark, hard-hitting punches mixed with enchanting melodies that weave through metaphorical lyricism.

Learn More About the Artists.

Nevve has been releasing music since 2015 and has been featured on tracks by 3LAU, Droeloe, Boombox Cartel, Manilla Killa and others. She is quickly becoming one of the most notorious vocal artists in electronic music  industry.

Trivecta jumped into the scene in 2014 when he released his first track through Monstercat. Three years later, he began touring with Illenium, Seven Lions, Tritonal, and Kill the Noise while becoming known for his melodic trance, bass, and drumstep music style.

Hailing from New York, Wooli is marking his territory in the riddim and dubstep genre. His 2018 EP, Mammoth was released on Never Say Die Records. Wooli’s also dropped massive remixes for Seven Lions and Excision, and did a collaboration with Snails late last year.

This isn’t the first time Wooli and Trivecta teamed up for a melodic bass track.

Earlier in 2018, Wooli and Trivecta dropped “Falling” through Monstercat records. It’s amazing to see these guys reunite. Especially to see them collaborate with Seven Lions, who has been keeping this niche genre alive since 2010. Grab a copy or stream “Island” here.

Before you go, check out Seven Lions at Tomorrowland Belgium.