Most festival-goers have a European electronic music festival on their bucket list. In addition to the acclaimed Tomorrowland, we dug into other European electronic music festivals that you should highly consider attending. From long-running music gatherings to award-winning festivals, each event bridges local culture, music and nature for an entirely unique experience. Whether you’re raving in an Icelandic glacier or swimming along the crystal clear coast, there are endless activities that will impress your wildest dreams.

Dive into a Mediterranean paradise at the brink of Croatia’s gorgeous coast for Sea Star Festival. European Festival Awards nominated the tropical music event as Best Medium Sized Festival in 2019. The organizers behind EXIT created Sea Star and has made the festival known for its impeccable production. 70 artists will perform across 6 stages, a few of which include Sven Vath, Nina Kraviz, and Ilario Alicante. Sea Star Fest will return to the enchanting Stella Maris lagoon in Umag, Croatia on May 24th and 25th. Special opening and closing parties will take place on the 23rd and 26th.

Secret Soulstice returns for its fifth anniversary in Iceland’s capital, Reykjavik. The one-of-a-kind festival is bound to flabbergast you with the wondrous beauty of mother earth. For starters, the sun doesn’t set for the entire 4 days of the event. That’s right, midnight pool parties will be heating up from the glistening sun rays all night long. On the main stage you can catch headlining acts such as Martin Garrix, Rita Ora, Morcheeba, and Pussy Riot, to name a few.

You can also find underground raves in a 5,000-year-old lava tunnel or in an Icelandic glacier.

Between music playing in the naturally heated lagoons, midnight boat parties, and gleaming waterfalls, there will be something to constantly keep you occupied. Taking place during the magical summer solstice, this festival is destined to leave you with unforgettable memories like no other. 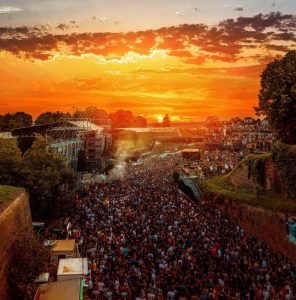 Held in Novi Sad, Serbia, EXIT Festival gathers over 20,000 attendees in the 17th century Petrovaradin Fortress. Cobbled paths, courtyards, underground tunnels, and the Danube River surround 20 outdoor stages for an enchanting layout. EXIT offers one of the most diverse lineups in Europe including genres like metal, reggae, pop and techno. Various artists like The Cure, Carl Cox, Boris Brejcha, Dimitri Vegas & Like Mike, and Sofi Tukker have already confirmed to perform during the four day event. EXIT started in 2000 as a student protest fighting for political change. It has now grown to be one of biggest festivals in Europe.

Down the Rabbit Hole combines surreal, adventurous, and psychedelic themes for its annual recurring event. It welcomes indie bands to renowned artists to perform over the long weekend in July. Robyn, Sketpta, The Roots, and Vampire Weekend are a few of the artists gracing the stage at Down the Rabbit Hole. If you need a break from the music, swimming, meditating in the forest, or discovering hidden discos will also be an option. Down the Rabbit Hole also offers the choice between traditional camping or renting luxurious accommodations at the Rabbit Resort. The eco-friendly and sustainable festival is held at De Groene Heuvels in Beuningen, Gelderland, Netherlands.

OFF Festival takes place in ’s ‘Valley of Three Ponds’ (Katowice). A mesmerizing green hideaway surrounds the location in the industrial Silesia region.  Off Festival formed in 2006 and continues to focus on experimentation and diversity. The genres are endless with performances by metal bands, techno DJs, post-punk acts, hip-hop rappers, jazz artists, and more! OFF festival avoids popular trends and showcases uprising talent and innovative Polish artists for an exclusively inspirational experience. You can expect Daughters, The Gaslamp Killer, Lebanon Hannover,  and many more to play at this underground party.

This long-running festival has been alive since 1993 and is one of the Netherlands’ most prestigious festivals. Lowlands features world-renowned headliners, art installations, comedy skits, films, debates, and science workshops! Additionally, the flawless operation includes top-notch food vendors and an intuitive layout to naturally find bars, food, and bathrooms along the path. It also has one of the best campsite facilities out of any large-sized festival in Europe.

Find yourself dancing along the glistening Adriatic Coast in Montenegro at Sea Dance Festival. This music gathering was voted Best Medium Sized Festival in 2014’s European Festival Awards. Sea Dance is a festival created by the makers of EXIT, and holds some of EXIT’s wondrous magic. Respectfully, it presents EXIT’s famous No Sleep Novi Sad stage that is surrounded by a gorgeous mountain range set in the distance.  With over 100 performers, Sea Dance has earned its reputation for featuring some of the most popular acts in electronic music.

This five day extravaganza inhabits the city of Amsterdam each October. Roughly 400,000 people travel to the Dutch capital for ADE. The festival features more than 2,500 international artists performing in 100 venues across the city.Amsterdam Dance Event also presents an electronic music conference that covers all aspects of the industry and culture. There are plenty of seminars, exhibitions, artist interviews, documentary screenings, and tech classes to leave your mind fresh with inspiration. Amsterdam Dance Event is definitely one festival to add to the bucket list.